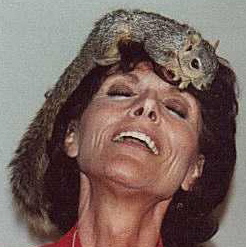 Once upon a time, there was a wild squirrel named CHCK CHK CHCK, who gave birth to ME, chk. I was a spring baby.

The first time out of the nest, wouldn’t ya know, something really bad happened to my back leg and CHK CHK CHK took me to this House of Nuts she knew and barked and barked and banged on the window until a weird witchy hermit came out and just scooped ME off the fence. It was shock at first sight.

Something called ‘bonding’ happens. I don’t like it. You don’t like it. It’s demeaning, but it happens. So the big pink weird witchy hermit, who shall henceforth be known as Pink Mama, or PM, wrapped ME up and delivered ME to a gas mask and, when I got back to the Nut House, the dangling mangled mess that had been my leg was gone.

Once my socket was healed, PM tried repeatedly and zealously to return ME to CHK CHK CHK, who still came around for the free nuts. But nope, nothin’ doin’. “Yours now, lady. Pass the pecans”. My natural mother was not a sentimentalist.

So PM tried repeatedly to pass ME off to other humans who cared for ’special’ squirrels. They tried. But nope, nothin’ doin’. I refused to thrive, by cracky. So PM took ME back and started believing that I loved her. Ha ha hahaha. My unnatural mother IS a sentimentalist .
She named ME Pearl.
Word to the wise~ Don’t name anything you don’t want. To name it is to tame it.

PM is forced to learn A LOT about looking after squirrels and get a license. There are squirrel protective services who come around to check. I kid you not. I think of them as the ill eagles who swoop down to make sure PM is not dressing ME inappropriately.

AND THEN First Love;
a brief sally into the demimonde with a squirrel named Stockton DuPres, but, alas, he turned out to be gay.
Not that there’s anything wrong with that.

Then came Sam. Love of my life, Sam ‘the teeth’ (see Pearl’s Pals). He was an Eastern Gray with ties to Sicily and serious ‘family connections’, if you get my drift.
Our PM’s became co-dependent out of self protection. You can purchase Sam’s mom’s Squirrel Ranch Spreads through the GIFTS page of this site. And, as always, you can donate to ME by clicking any one of the beautiful buttons provided for this purpose. But I digress…

Sam and I were fated to never meet on the earthly plane although our incendiary love letters are soon to be self-published.
It’s different here. We met up and jumped the broom, then served it at the reception. Sam’s over the ledge now, pitching popcorn at the dog.

We spend most nights at home, gnawing scrabble and making plans to expedite a visit from the in-laws.
They don’t respond to simple invitations because changing planes is “too inconvenient”. They have “too much to do first” and nyah nyah nyah. So we’re surprising them by subsidizing the trip.